We have now had the T540 in stock for around two months and they are selling well and so they should, they are long awaited and we the Skyland tree team took one of our first batch so we can use it but also to give you the customers feedback. Okay I'm not going to say it's the best thing since sliced bread blah blah blah because as a dealer of them that is what you expect hey.

I will be honest, at first it was wobbly, shaky, vibrating a bit, it didn't seem to have the balance of the Stihl 200t and I did think oh no please no and I hoped it would smooth out which it did, so it just needed running in which is very normal.

As the days went on it just got better and better until the day when it was left on the chipper, the chipper got fired up and bang the saw flew off and the start switch smashed into a million pieces!

Husqvarna had none of the starter switches in stock so we had to use it with a piece of cello tape covering the electrics so it wouldn't turn off, this didn't look great when I was showing it one of our customers but he still walked out of the shop with one hooray!

We got a new starter switch and away it went and what a beauty it is, I took down an over mature Beech with it last week and it hammered it's way through all the way until I ran out of bar length and even then I didn't want to give it up for the 560 but it had to be done. We use the 14' bar but i do wonder what it would be like with a 12", we call it the mini beast and with a 12''  would be quite scary!
It feels lighter than the 200t IMO but it isn't they weigh exactly the same so I presume it is better balanced and it does feel this way. The fuel consumption is great as expected, you seem to get around an hour in the tree with it on all the time but not revving obviously.

The power it has is great, the torque is fantastic but there a few problems, the loop on the back to attach it to your strop is weak and some have broken and away has gone the saw from the tree, Husqvarna have now addressed this and have sent out stronger loops.The dawgs are not the best, they don't dig into the wood to give you that grip and to be honest this is something Husky need to address on all their saws. There is another clip you can attach on the back so you can clip it onto a caritool on your harness so it hangs at your waste and doesn't dangle, don't bother, it is a nightmare trying to get it off the caritool once it is on.
It did originally come with fuel and oil caps which needed a spanner or a strong hand to get them off but now they should all come with flip caps which makes life a touch easier and they look nice too.
For now the problems it does have are minor and not really issues except for the weak loop but as I said it has been addressed by Husky and shouldn't be a problem again.
I have to admit if you are thinking of going over to Husqvarna in the top handle saw section then take the leap and don't look back! Stihl will always be there and one day they will have probably a better saw than this but for now this is the one! 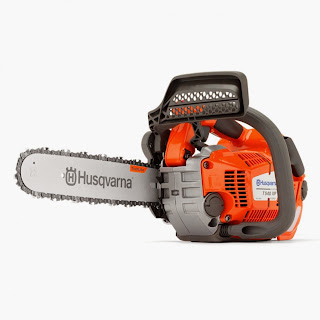 Posted by Skyland at 6:13 pm No comments:

What is your favourite handsaw